Why the Family Isn’t Working

January 8, 2016 By ISI Archive
Image by Jonathan Adami via Flickr.

The following is excerpted from Robert Nisbet’s prescient book, The Quest for Community.

Nowhere is the concern with the problem of community in Western society more intense than with respect to the family. The contemporary family, as countless books, articles, college courses, and marital clinics make plain, has become an obsessive problem. The family inspires a curious dualism of thought. We tend to regard it uneasily as a final manifestation of tribal society, somehow inappropriate to a democratic, industrial age, but, at the same time, we have become ever more aware of its possibilities as an instrument of social reconstruction.

It is doubtless one more manifestation of the contemporary quest for security that students of the family increasingly see its main “function” to be that of conferring “adjustment” upon the individual, and, for the most part, they find no difficulty at all in supposing that this psychological function can be carried on by the family in what is otherwise a functional vacuum. Contemporary social psychology has become so singlemindedly aware of the psychological gratification provided by the group for individual needs of security and recognition that there is an increasing tendency to suppose that such a function is primary and can maintain itself autonomously, impervious to changes in institutional functions which normally give a group importance in culture. For many reasons the contemporary family is made to carry a conscious symbolic importance that is greater than ever, but it must do this with a structure much smaller in size and of manifestly diminishing relevance to the larger economic, religious, and political ends of contemporary society.

Historically the family’s importance has come from the fact of intimate social cohesion united with institutional significance in society, not from its sex or blood relationships. In earlier ages, kinship was inextricably involved in the processes of getting a living, providing education, supporting the infirm, caring for the aged, and maintaining religious values. In vast rural areas, until quite recently, the family was the actual agency of economic production, distribution, and consumption. Even in towns and cities, the family long retained its close relation to these obviously crucial activities. Organized living was simply inconceivable, for the most part, outside of the context provided by kinship. Few individuals were either too young or too old to find a place of importance within the group, a fact which enhanced immeasurably the family’s capacity for winning allegiance and providing symbolic integration for the individual.

The interpersonal and psychological aspects of kinship were never made to rest upon personal romance alone or even upon pure standards of individual rectitude. Doubtless, deviations from the moral code and disillusionment with romance were as common then as now. But they did not interfere with the cultural significance of the family simply because the family was far more than an interpersonal relationship based upon affection and moral probity. It was an indispensable institution.

But in ever-enlarging areas of population in modern times, the economic, legal, educational, religious, and recreational functions of the family have declined or diminished. Politically, membership in the family is superfluous; economically, it is regarded by many as an outright hindrance to success. The family, as someone has put it, is now the accident of the worker rather than his essence. His competitive position may be more favorable without it. Our systems of law and education and all the manifold recreational activities of individuals engaged in their pursuit of happiness have come to rest upon, and to be directed to, the individual, not the family. On all sides we continue to celebrate from pulpit and rostrum the indispensability to economy and the State of the family. But, in plain fact, the family is indispensable to neither of these at the present time. The major processes of economy and political administration have become increasingly independent of the symbolism and integrative activities of kinship.

There is an optimistic apologetics that sees in this waning of the family’s institutional importance only the beneficent hand of Progress. We are told by certain psychologists and sociologists that, with its loss of economic and legal functions, the family has been freed of all that is basically irrelevant to its “real” nature; that the true function of the family—the cultivation of affection, the shaping of personality, above all, the manufacture of “adjustment”—is now in a position to flourish illimitably, to the greater glory of man and society. In a highly popular statement, we are told that the family has progressed from institution to companionship.

But, as Ortega y Gasset has written, “people do not live together merely to be together. They live together to do something together.” To suppose that the present family, or any other group, can perpetually vitalize itself through some indwelling affectional tie, in the absence of concrete, perceived functions, is like supposing that the comradely ties of mutual aid which grow up incidentally in a military unit will long outlast a condition in which war is plainly and irrevocably banished. Applied to the family, the argument suggests that affection and personality cultivation can somehow exist in a social vacuum, unsupported by the determining goals and ideals of economic and political society. But in hard fact no social group will long survive the disappearance of its chief reasons for being, and these reasons are not, primarily, biological but institutional. Unless new institutional functions are performed by a group—family, trade union, or church—its psychological influence will become minimal.

No amount of veneration for the psychological functions of a social group, for the capacity of the group to gratify cravings for security and recognition, will offset the fact that, however important these functions may be in any given individual’s life, he does not join the group essentially for them. He joins the group if and when its larger institutional or intellectual functions have relevance both to his own life organization and to what he can see of the group’s relation to the larger society. The individual may indeed derive vast psychic support and integration from the pure fact of group membership, but he will not long derive this when he becomes in some way aware of the gulf between the moral claims of a group and its actual institutional importance in the social order.

All of this has special relevance to the family, with its major function now generally reduced by psychologists to that of conferring adjustment upon individuals. Yet in any objective view the family is probably now less effective in this regard than it has ever been. It is plain that the family is no longer the main object of personal loyalty in ever larger sections of our population, and it is an overstrain on the imagination to suppose that it will regain a position of psychological importance through pamphlets, clinics, and high-school courses on courtship and marriage. How quaint now seems that whole literature on sexual adjustment in marriage with its implicit argument that sexual incompatibility is the basic cause of the reduced significance of marriage. Some of the solemn preoccupations with “family tensions” which now hold the field of clinical practice will one day no doubt seem equally quaint. 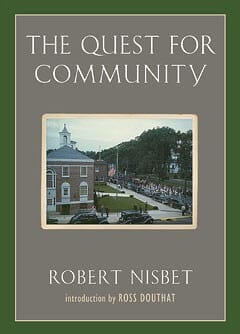 The current problem of the family, like the problem of any social group, cannot be reduced to simple sets of psychological complexes which exist universally in man’s nature, or to an ignorance of sexual techniques, or to a lack of Christian morality. The family is a major problem in our culture simply because we are attempting to make it perform psychological and symbolic functions with a structure that has become fragile and an institutional importance that is almost totally unrelated to the economic and political realities of our society. Moreover, the growing impersonality and the accumulating demands of ever larger sections of our world of business and government tend to throw an extraordinary psychological strain upon the family. In this now small and fragile group we seek the security and affection denied everywhere else. It is hardly strange that timeless incompatibilities and emotional strains should, in the present age, assume an unwonted importance—their meaning has changed with respect to the larger context of men’s lives. We thus find ourselves increasingly in the position of attempting to correct, through psychiatric or spiritual techniques, problems which, although assuredly emotional, derive basically from a set of historically given institutional circumstances.

Robert Nisbet (1913-1996) was a professor at Columbia University and the author of The Sociological Tradition, The Social Bond, The Present Age, and other books.