Conservative Book of the Year Award

ISI’s Conservative Book of the Year award recognizes thoughtful books that contribute to the rich debate about important conservative ideas. The winner receives a $10,000 cash prize along with ISI’s Paolucci Book Award.

On June 25, ISI presented the 2021 Conservative Book of the Year award to Yuval Levin for his acclaimed work A Time to Build.

Yuval Levin Receives the 2021 Conservative Book of the Year award 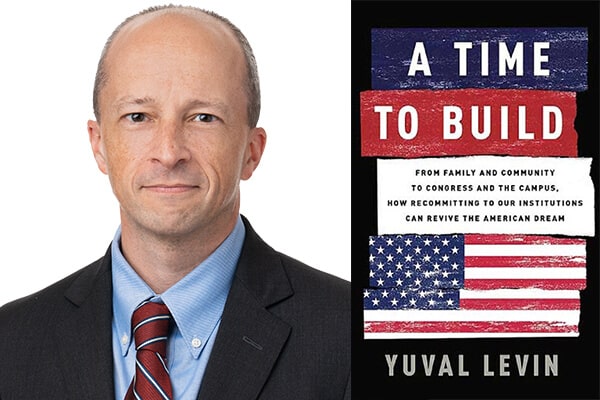 On Friday, June 25, ISI presented the 2021 Conservative Book of the Year award to Yuval Levin, author of the acclaimed work A Time to Build.

As the Wall Street Journal’s Peggy Noonan says, A Time to Build is “exactly what America needs right now”—“a moving call to recommit to the great project of our common life.” First Things editor R. R. Reno calls A Time to Build a “perceptive and important book” that “sets an agenda for renewing the institutions we need in order to live and flourish together as Americans.”

About Yuval Levin and A Time to Build, winner of the 2021 Conservative Book of the Year award 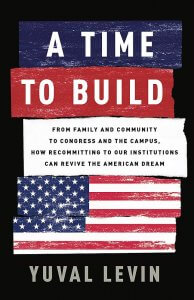 America is in crisis. Our politics are bitterly divided.

You’ve seen it. The evidence is everywhere: on campuses, in social media, in the traditional media.

More and more Americans feel alienated—and the isolating effects of COVID-19 have made the problem even worse.

So what do you do?

It’s tempting to fall into despair—or anger. And no doubt we see anger on both left and right these days.

In A Time to Build, acclaimed political thinker Yuval Levin shows that rage and violence need not mark the path forward.

The social crisis we confront is not defined by an oppressive presence, he shows. No, the problem is a debilitating absence—an absence of the forces that unite us.

Now is not the time to tear down. It is time to build and rebuild—to rebuild the vital institutions that have shaped American life, from families to schools, from churches to the military.

The Wall Street Journal declares that A Time to Build offers “trenchant” analysis that is “at once simpler, more generous and more cogent” than what you typically hear from left or right.

Yuval Levin is the editor of National Affairs and the director of social, cultural, and constitutional studies at the American Enterprise Institute (AEI). A former member of the White House domestic policy staff under President George W. Bush, he has written for the New York Times, the Washington Post, and the Wall Street Journal, among many other publications. His previous books include The Fractured Republic and The Great Debate. He holds an MA and a PhD from the Committee on Social Thought at the University of Chicago.

PRAISE FOR A TIME TO BUILD

“A Time to Build is exactly what America needs right now. A moving call to recommit to the great project of our common life. And from Yuval Levin, one of the most thoughtful and pertinent of our public intellectuals, who writes like a dream if dreams were always clear. What an encouraging book this is, and what an important one.”
—Peggy Noonan, Wall Street Journal

“Excellent . . . Levin discusses how we’ve degraded our institutions by not letting them shape and constrain us, but instead using them as mere platforms.”
—Rich Lowry, National Review

“A Time to Build diagnoses the decline of institutions as the source of many social ills, including loneliness and despair, that have been attributed to other causes.”
—Mona Charen

“A provocative, inspiring look at the underlying cause of our polarization and dysfunction.”
—Kirkus

“There is a great deal of ruin in our society. Yuval Levin does not shrink from taking the full measure of our woes. But his counsel is not despair. This perceptive and important book sets an agenda for renewing the institutions we need in order to live and flourish together as Americans.”
—R. R. Reno, editor of First Things

ISI honors the Conservative Book of the Year with the Paolucci Book Award. The award is named in memory of Henry and Anne Paolucci, distinguished scholars, teachers, and writers who exemplified the ideal of the public intellectual.
The award winner’s lecture is routinely aired on C-SPAN’s Book TV. See links below for previous broadcasts. Past winners of the award include: