Where Did Americans Get Their Liberties? - Intercollegiate Studies Institute
Skip to content

Where Did Americans Get Their Liberties?

This brings us to the threshold of religion, and therefore to the other aspect of the problem of pluralism, the plurality of religions in America. However, before crossing this threshold one more characteristic of the American Proposition, as implying a consensus, needs mention, namely, the Bill of Rights. The philosophy of the Bill of Rights was also tributary to the tradition of natural law, to the idea that man has certain original responsibilities precisely as man, antecedent to his status as citizen. These responsibilities are creative of rights which inhere in man antecedent to any act of government; therefore they are not granted by government and they cannot be surrendered to government. They are as inalienable as they are inherent. Their proximate source is in nature, and in history insofar as history bears witness to the nature of man; their ultimate source, as the Declaration of Independence states, is in God, the Creator of nature and the Master of history. The power of this doctrine, as it inspired both the Revolution and the form of the Republic, lay in the fact that it drew an effective line of demarcation around the exercise of political or social authority. When government ventures over this line, it collides with the duty and right of resistance. Its authority becomes arbitrary and therefore nil; its act incurs the ultimate anathema, “unconstitutional.”

One characteristic of the American Bill of Rights is important for the subject here, namely, the differences that separate it from the Declaration of the Rights of Man in the France of ’89. In considerable part the latter was a parchment-child of the Enlightenment, a top-of-the-brain concoction of a set of men who did not understand that a political community, like man himself, has roots in history and in nature. They believed that a state could be simply a work of art, a sort of absolute beginning, an artifact of which abstract human reason could be the sole artisan. Moreover, their exaggerated individualism had shut them off from a view of the organic nature of the human community; their social atomism would permit no institutions or associations intermediate between the individual and the state.

In contrast, the men who framed the American Bill of Rights understood history and tradition, and they understood nature in the light of both. They too were individualists, but not to the point of ignoring the social nature of man. They did their thinking within the tradition of freedom that was their heritage from England. Its roots were not in the top of anyone’s brain but in history. Importantly, its roots were in the medieval notion of the homo liber et legalis, the man whose freedom rests on law, whose law was the age-old custom in which the nature of man expressed itself, and whose lawful freedoms were possessed in association with his fellows. The rights for which the colonists contended against the English Crown were basically the rights of Englishmen. And these were substantially the rights written into the Bill of Rights.

Of freedom of religion there will be question later. For the rest, freedom of speech, assembly, association, and petition for the redress of grievances, security of person, home, and property— these were great historical as well as civil and natural rights. So too was the right to trial by jury, and all the procedural rights implied in the Fifth and later in the Fourteenth Amendment provision for “due process of law.” The guarantee of these and other rights was new in that it was written, in that it envisioned these rights with an amplitude, and gave them a priority, that had not been known before in history. But the Bill of Rights was an effective instrument for the delimitation of government authority and social power, not because it was written on paper in 1789 or 1791, but because the rights it proclaims had already been engraved by history on the conscience of a people. The American Bill of Rights is not a piece of eighteenth century rationalist theory; it is far more the product of Christian history. Behind it one can see, not the philosophy of the Enlightenment but the older philosophy that had been the matrix of the common law. The “man” whose rights are guaranteed in the face of law and government is, whether he knows it or not, the Christian man, who had learned to know his own personal dignity in the school of Christian faith. 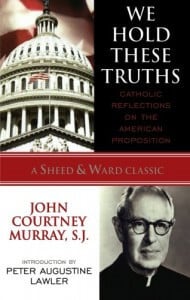 We Hold These Truths: Catholic Reflections on the American Experience
Sheed & Ward (2005)