I have never been asked to deliver a commencement address, owing, no doubt, to a lack of worldly accomplishments and my $3,500 per diem. But I know at least three people who have, none of whom is still speaking to me. So, should you find yourself roped into such a commitment, only to realize you haven’t a thing to say that hasn’t already been said by someone from the cast of Goodfellas, please feel free to use this winner of a speech, appropriate for any college in the United States or Canada and available for a nominal fee (cash only). You’re welcome.

What do we mean when we say that this is a “commencement”? Is it truly a new beginning, or merely a paradoxical designation for the end of your education? The answer will depend primarily on how much debt you have accumulated. Seeing as this fine institution gouges the working and middle classes to the same extent as other, even better, fine institutions, I will wager that your best years are behind you.

So where does that leave your mortarboarded selves, other than staring blankly into the void like a gaggle of stupefied monks trapped in a Stanley Kubrick movie? As a great superintendent of higher education once declaimed, “Fat, drunk, and stupid is no way to go through life.” I disagree. If such were the case, where would that leave CNN? Or Buzzfeed? Or at least five Cabinet appointees?

What is Truth? When that question was famously asked, Socrates was already dead, and so we knew that Truth was something you only thought you knew, like which Kardashian to follow on Instagram, but was in reality too elusive to grasp, otherwise you’d be like Socrates, which is to say dead. And so continuing education was born.

Allow me to tell a story so inappropriate it can only end in a subpoena. Oh forget it. What can I say that won’t result in a riot or another iteration of that crazy Hitler video where he’s suddenly screaming about piñatas and cultural appropriation? What has happened to our great universities, and even our crappy ones? Where did the spirit of debate, free inquiry, and open exchange of ideas flee to? Flanders? And what ever happened to Flanders? How do you lose a whole damn country? Moreover, could Lincoln and Douglas have held their historic debates in this censorious climate, or would they, too, have been deplatformed, forced to do that stupid Joe Rogan podcast and drop F-bombs every five minutes?

When I think of the great minds who have contributed to the best in American education, I never think of John Dewey, who mumbled, “We always live at the time we live and not at some other time, and only by extracting at each present time the full meaning of each present experience are we prepared—” OH SHUT UP. What a pompous ass. May his decimal system be tossed onto the trash heap of history alongside cyclamates, late-night comedy, and penmanship.

Many of you have spent the past six or seven years working on the unfortunately named bachelor’s degree. But how much of that time was spent in a classroom and not marching up and down the campus like an idiot decrying the presence of others? “Why isn’t there more me?” you screamed at the nullity that is the average state-college administration. 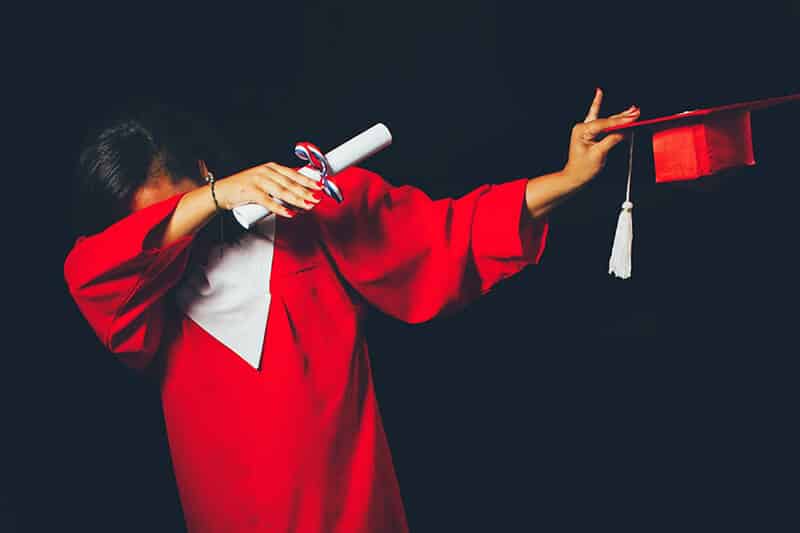 Now be honest: when scientists at Shevchenko Transnistria State University first discovered the microaggression—that slight of one’s feelings, that affront to one’s very being, demonstrated in gestures so asthenic only a demented Sherlock Holmes could detect them—you tittered in nongendered delight. “At last, a stick to beat my oppressors with, and one they will never see coming, like the atomic bomb or Pokémon Go.” You should thank the impersonal forces of chance, fate, and an uninhibited weekend in Punta Cana that you were born at a time when ressentiment opens more doors than a Phi Beta Kappa key, and shallow thinking is the sine qua non of social-media popularity. Who knew of the “safe space” back when Cotton Mather roamed the halls of Harvard, wondering how he could get back at his father, Increase, for his ludicrous name? Do you think Jonathan Edwards, fermenter of the Great Awakening, would have had the courage to test that smallpox vaccine if he’d known Princeton was in New Jersey, home to that slave-owning colonel Lewis Morris? Who alive can answer these questions? Or even ask them with a straight face?

What have you learned in your years here at this fine institution? Probably that your every synaptic discharge is inviolate, like the U.S. Constitution if it hadn’t been rendered obsolete by your every synaptic discharge. “Why should there be freedom of speech when that speech can be used to tsk at my taste in footwear?” you ask between episodes of Broad City. “Why should there be freedom of religion when God produces so many Twitter trolls? Why should there be freedom to bear arms when you can barely bear me? Freedom is for haters!” Then, spitting with rage and soy sauce, you cite that architect of empty grocery shelves Karl Marx: “Democracy is the road to socialism!” And since socialism is the road to ruin, just keep voting for either party and there’s guaranteed a trailer park in your future.

I mourn for this generation. Here you are, heirs of the great Western tradition, of the titanic humanistic thinkers in whose time-honored paths you could be traveling, but instead you’ve set your GPS for Silicon Valley, which makes the biblical Valley of Gehenna look like Walley World. Instead of asking the great questions “Who am I? Why am I here? What is the good life?” you’re too busy googling, “How old do you have to be to sext a senator?” or “What can I do with a degree in Diversity Studies?”—questions that would confound a Parmenides. (I could probably set you straight, but you would not like the process, as it almost certainly means blowing through your parents’ Blue Cross deductible.)

You will meet many challenges once you leave the echo chamber and craven acquiescence of this fine institution. First, there will be people—which is to say, people who are not you. And worse, people who will refuse to affirm your vaunted self-image and who may even contradict you when you evince a knowledge of history so shallow it makes Apple’s new butterfly keyboard look like the Spanish Steps. Then you may be forced to share an Uber with someone who didn’t think Brooklyn Nine-Nine worth reviving or who admits to having seen The Great Wall. Or you may catch a glance of a prom dress that resembles a Han dynasty ruqun but is in fact a Ming dynasty Python robe. Are you prepared to enter the lists of an uproarious history, that malevolent maelstrom with no right side but plenty of commercials for vegetable choppers? I think not.

You’re venturing into the midst of a merciless rabblement for whom success is all that matters. And how is success measured? Facebook friends, virtual followers, digital likes. Equity in Wall Street–traded insecurities. Cryptocurrency. Ever-shifting status symbols and other mirages. Ghosts in machines you keep in your cargo shorts. Your self-worth will be reduced to so much collated data, a mere commodity to people who mean you no good.

So remember: no one on his deathbed ever said he wished he’d spent more time at the chiropractor. Let that sink in. Then get back to me.