The following is adapted from Rodney Stark’s new book, The Triumph of Faith.

Many intellectuals insist that a worldwide triumph of secularization is inevitable, and they applaud whatever is interpreted as a sign of religious decline. Religious believers, meanwhile, lament these same signs. The crucial point is that both sides accept the premise that the world is becoming more secular.

Well, they are both wrong.

The world is not merely as religious as it used to be. In important ways, it is much more intensely religious than ever before. Around the globe, four out of every five people claim to belong to an organized faith, and many of the rest say they attend worship services. In Latin America, Pentecostal Protestant churches have converted tens of millions, and Catholics are going to Mass in unprecedented numbers. There are more churchgoing Christians in Sub-Saharan Africa than anywhere else on earth, and China may soon become home of the most Christians. Meanwhile, Islam enjoys far higher levels of member commitment than it has for many centuries, and the same is true for Hinduism.

Despite all this, the media regularly report new “proofs” of the rapid decline of religion in America and abroad. In May, the Pew Research Center released its latest Religious Landscape Survey. Pew’s director of religion, Alan Cooperman, summed it up by saying, “The country is becoming less religious as a whole, and it’s happening across the board.” Pew followed up with another survey in November, trumpeting its findings with the headline “U.S. Public Becoming Less Religious.”

Every important claim that I make in my book The Triumph of Faith is based on carefully reported solid evidence. The empirical backbone of my book is provided by the truly remarkable Gallup World Polls, which began in 2005 and consist of annual, national surveys conducted in 163 nations that by now add up to more than a million interviews. Never before has a scholar had access to such a body of data.

And what do the data tell us? Quite simply, that a massive religious awakening is taking place around the world.

Even the United States, the focus of those Pew surveys, remains highly religious. Nearly all Americans say they believe in God; 80 percent believe in heaven; half pray daily (29 percent pray more than once a day), and only 13 percent do not pray at all.

Nevertheless, determined secularizationists grasp at any hint that the decline of religion has finally begun. What is surprising is the instant credibility that clergy and presumably religious media so frequently give to “bad news” claims about American religiousness. Let’s consider some of the most alarming reports.

Young people are leaving the churches in droves! This is so generally believed that nearly everything written about it in periodicals such as Christianity Today is to explain why the exodus is happening and what can be done to reverse the trend. This table shows the basis for the concern:

These data come from the highly reputable General Social Survey of American adults conducted annually by the National Opinion Research Center at the University of Chicago. Obviously, younger Americans are attending church less often than are older generations, and if this reflects the onset of a trend, American church attendance is going to drop substantially.

But the data in the table were collected in 1980! And overall church attendance did not decline after that.

The truth is that similar results can be found in practically any national survey ever conducted. Younger people, especially those under thirty, have always been, and probably will continue to be, less likely than older Americans to attend church regularly. Why? Because they tend to be unmarried, to stay out late on Saturday night, and to prefer to sleep in on Sunday mornings. But, generation after generation, Americans have greatly increased their church attendance as they get married and have children.

That doesn’t stop each new generation of survey researchers from sounding false alarms that cause anxious responses from the pulpits.

Church attendance continues to decline! Whether reported gleefully or with grave concern, this is a constant refrain. But it isn’t true.

Church attendance in the United States has held steady for forty years; variations from year to year are entirely within the range of random variation that applies to all surveys.

But what this means is not so obvious, for, during this same period, church attendance did not decline and the number of atheists did not increase. Indeed, the percentage of atheists in America has stayed steady at about 4 percent since a question about belief in God was first asked in 1944. In addition, except for atheists, most of the other “nones” are religious in the sense that they pray (some pray very often) and believe in angels, in heaven, and even in ghosts. Some are also rather deeply involved in “New Age” mysticisms.

So who are these “nones,” and why is their number increasing—if it is? Back in 1990 most Americans who seldom or never attended church still claimed a religious affiliation when asked to do so. Today, when asked their religious preference, instead of saying Methodist or Catholic, now a larger proportion of nonattenders say “none,” by which most seem to mean “no actual membership.” The entire change has taken place within the nonattending group, and the nonattending group has not grown.

In other words, this change marks a decrease only in nominal affiliation, not an increase in irreligion. So whatever else it may reflect, the change does not support claims for increased secularization, let alone a decrease in the number of Christians.

It may not even reflect an increase in those who say they are “nones.” The reason has to do with response rates and the accuracy of surveys.

A survey’s “completion rate” refers to the percentage of people from the original sample with whom interviews are successfully conducted. As the completion rate falls, surveys become less accurate portraits of the population sampled. That is because those who refuse to take part in a survey or who cannot be reached are known to differ in many important ways (such as income, education, race, and age) from those who do take part. When I was a young sociologist at the University of California, Berkeley, Survey Research Center, any survey that failed to interview at least 85 percent of those persons originally drawn into the sample was not to be trusted. The Pew survey of 2012 had a completion rate of only 9 percent. The 2014 survey was based on samples of phone numbers and had a completion rate of 11.1 percent for the landline sample and 10.2 percent for the cell phone sample. The probable inaccuracy of such surveys is huge. 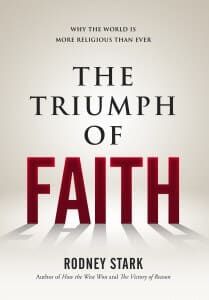 Get the rest in Rodney Stark’s new book, The Triumph of Faith!

Pew’s completion rates are much lower now than they were in earlier decades. The question arises: what has been changing, the extent of response rate bias or the actual percentage of Americans whose religious affiliation is none? It is impossible to say. But as response rates have fallen, those willing to take part in surveys increasingly are the less educated and less affluent. And, contrary to the common wisdom, those are precisely the people who are least likely to belong to a church.

There are many more such false alarms. Secularists have been predicting the imminent demise of religion for centuries. They have always been wrong—and their claims today are no different. It is their unshakeable faith in secularization that may be the most “irrational” of all beliefs.

Rodney Stark is the bestselling author of How the West Won, The Victory of Reason, The Rise of Christianity, God’s Battalions, and many other books. He serves as Distinguished Professor of the Social Sciences at Baylor University, where he is codirector of the Institute for Studies of Religion.