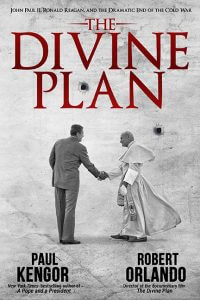 Wilmington, DE — ISI Books, the publishing division of the Intercollegiate Studies Institute, is pleased to announce that it will publish a forthcoming book by bestselling author Paul Kengor and writer-director Robert Orlando. The book, to be published in June 2019, will be titled The Divine Plan: John Paul II, Ronald Reagan, and the Dramatic End of the Cold War.

Kengor and Orlando will offer an extraordinary new look at the singular bond between Pope John Paul II and President Ronald Reagan—and how that bond led them to confront Soviet Communism.

Just six weeks apart in the spring of 1981, John Paul II and Reagan took bullets from would-be assassins. The pope and the president bonded over surviving these near-death experiences.

They even confided to each other a shared conviction: that God had spared their lives for a purpose.

That reason? To defeat Communism.

In private, Reagan had a name for this: the “DP”—the Divine Plan.

The Divine Plan will be released in conjunction with a documentary film of the same name. The trailer for the film is available at thedivineplanmovie.com.

ISI Books editor in chief Jed Donahue said: “We are thrilled to publish this follow-up to Paul Kengor’s acclaimed bestseller A Pope and a President. Paul and Robert Orlando shine new light on the partnership that ended the Cold War. Through their tireless research, including more than 50 hours of interviews with leading experts, they have teamed up to develop a one-of-a-kind book.”

Paul Kengor, PhD, is the New York Times bestselling author of A Pope and a President, God and Ronald Reagan, 11 Principles of a Reagan Conservative, Dupes, The Communist, and other books. He is professor of political science at Grove City College.

Robert Orlando is an award-winning writer and filmmaker. The founder of Nexus Media, he has been involved in the production, development, or release of more than a dozen film and documentary projects. Sony Pictures released his most recent documentary, Silence Patton. Orlando wrote and directed the companion documentary to be released in conjunction with The Divine Plan.

About the Intercollegiate Studies Institute

Founded in 1953, ISI inspires college students to discover, embrace, and advance the principles and virtues that make America free and prosperous.

To interview Paul Kengor or Robert Orlando, contact Jed Donahue at 302-524-6165 or jdonahue@isi.org