What to Do When College Disappoints - Intercollegiate Studies Institute: Think. Live Free.
Skip to content

What to Do When College Disappoints

When it comes to images of “academia,” Hollywood (in such films as With Honors and The Great Debaters) has peppered our imaginations with ivy-laced buildings where learned mentors celebrate the individual achievements of their students. The reality, however, is that professors are burdened by an ever increasing bureaucracy on campus that both outnumbers them and consumes their resources. Even the most student-dedicated members of the faculty are today resigned to seeing teaching as only one of the many hats they wear for the university.

I teach English composition, and how far adrift institutional learning has gone is self-evident when I thumb through a prospective textbook for one of my courses. With such a rich tradition of writing in our Anglo-American tradition, and within our broader global experience, I’m quite chopfallen that the best we can do for our freshman students are readings such as “The Cultural Significance of the Barbie Doll” or “The Curious Grammar of Police Shootings.”

After church on Sundays, I sometimes take Lucy—my six-year-old daughter who has autism—on walks around downtown Clemson, and in turn she leads me into unforeseeable places. One particular humid and sticky afternoon, Lucy led me to a bar with outdoor seating where some college students were discussing something over a pizza and pitcher. The students were so engaged in their Sunday beer and conversation that they took little notice of us. Lucy was content to settle there, so I sat and overheard some of the conversation.

From what I heard, the students were complaining about the education they were receiving. One girl said, “I thought the classes and professors would be challenging, but I’m not getting the education I was promised when I came.” The other students agreed that their classroom experiences were falling short of their expectations.

What struck me most was that these were Clemson students. Clemson University: a “public ivy” institution with a reputation for top faculty and student excellence in the classroom.

The conversation of that day embodies the great problem within higher education. In the Classical Age of learning in ancient Greece, Plato argued that true education not only conveyed to us a right knowledge but also taught us to desire those things that are right and good. By the standard of the ancients, the current state of higher education is unquestionably prostrate and lamentable.

Fixing all this will take time: perhaps a generation of activism and argument. But for now the question is: what can you do to supplement what’s lacking in your education?

Much of education has to be what students make of it; in fact, it has always been so. But how can students take charge of their educations? I believe one answer can be gleamed from our past.

Much of the history of higher education is built around groups and clubs that sometimes were only tangentially related to the lecture hall. In the movie Chariots of Fire (1981), an early scene takes place at Cambridge University in 1919 at the beginning of the school term. All the student clubs are assembled so the incoming freshmen can decide if they want to join.

This scene from Chariots of Fire underscores a basic truth about Cambridge culture at that time: students were formed by their involvements and associations as much as they were by the classroom. Student organizations at Cambridge were numerous and active, often organized by the students themselves. Cambridge professors could be involved in clubs, sometimes mentoring or merely sharing membership with the students, but faculty oversight was limited when it came to such groups.

At Oxford University in 1929, a new faculty member named J.R.R. Tolkien started a club he called Kolbitar (meaning “Coal-Bitters” in Old Norse) that was dedicated to the Old Scandinavian languages. While Tolkien believed that the study of Old Norse and Icelandic had an intrinsic value, Tolkien possessed an understanding of what the Austrian philosopher Ludwig Wittgenstein later said about how the “limits of my language mean the limits of my world.” Tolkien wanted his Kolbitar club to help those who enjoyed the Norse legends to experience these sagas in their original tongue; as members became more fluent in the old languages, Tolkien believed that they would experience the world of Odin and Sigurd as if they were native to the ashen tree of the Norsemen.

In 1931, Tolkien and one of his fellow Kolbitars—another faculty member named C.S. Lewis—were invited by Oxford student Edward Tangye Lean to join his new club called The Inklings. Members of the group would read aloud their own creative manuscripts at gatherings and receive feedback. Lean graduated after 1933, but The Inklings became Tolkien’s and Lewis’s creative hub for their professor colleagues, former students, and local friends. The group functioned as a crucible for The Lord of the Rings trilogy and the Narnia novels that we read today, but as Alan Jacobs reminds us, the members of The Inklings were much more to each other than a writing workshop:

They provided an enthusiastic, but constructively critical, audience for all sorts of stories and arguments; they formed a society in which formerly lonely and isolated men discovered that it was not necessarily so crazy to believe in God and miracles or to write stories about Elves and Dwarfs and creatures called “hobbits.”

While few campuses can boast of a Tolkien or Lewis, this world of thriving student organizations was once the terra firma of higher education.

You have the power to seize your own college experience and make it what you want it to be. This might seem like something out of Dead Poets Society (conjuring images of Robin Williams standing on his desk, etc.), but the history of higher education is built around groups, both formal and informal, and their history dots the landscapes of our institutions: our past can be the future.

In his poem “Jerusalem,” William Blake proclaimed that a sword should not sleep in our hands. If dynamic learning is what you truly desire, then create autonomous groups rather wait on classrooms or campus bureaucracies. Such a solution is quite conservative, since it draws its inspiration from the past; however, it is likewise radical since the entire machinery of higher education is aligned in an antithetical direction.

Such a “once and future” model of the university could be appealing to those Clemson students who on that Sunday afternoon felt helpless to do anything. Offer your fellow undergrads places where—in the words of Alfred Lord Tennyson—their creativity and metacognitive awareness can “sail beyond the sunset, and the baths of all the western stars.”

In the hands of persons who decide to grow together, swords do not slumber.

Basil Chad Chisholm is a professor of English at Southern Wesleyan University in South Carolina, where he specializes in the study of rhetoric, composition, and language. He is the author of several articles and books on a variety of topics, including literary criticism, pedagogy, local history, and film. 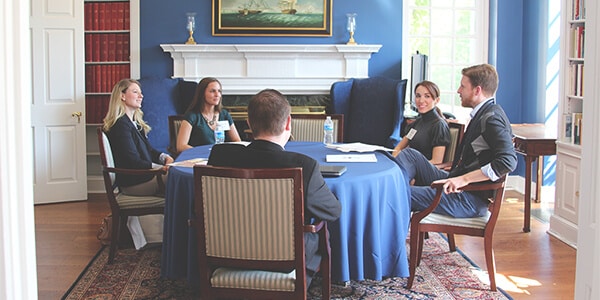 We’re building an intercollegiate, intellectual community of students and scholars from all over the United States. Join our Facebook group today to participate in conversations dedicated to the substance, principles, and virtues of authentic conservatism.

Complement with Russell Kirk on the purpose of the liberal arts, Stella Morabito on how to tell truth from propaganda, and Michael Ward on C.S. Lewis and the art of disagreement.

Dorothy L. Sayers and C.S. Lewis, two of the 20th century's most celebrated writers and Christian apologists, had a complex,...

Does Tradition Belong in American Politics?

Tradition holds a lot of promise for a country comprised of immigrants. It's also difficult to define.