“Hobbits on My Hands”: Two Keys to Understanding Tolkien’s Myths

As viewers flock to see the last installment of Peter Jackson’s Hobbit trilogy, the IR is taking a look at the sources and meaning of the mythology that has enchanted so many readers and filmgoers. Here, Bradley J. Birzer addresses some fundamental—but oft-overlooked—aspects of J. R. R. Tolkien’s mythology.

Two fundamental aspects of Tolkien’s mythology must be stated from the outset. First, as every reader of Tolkien has found—either to his delight or to his chagrin—Tolkien created a world vastly complex and nuanced. For those who enjoy it, the mythology is invitingly real and awesomely complete. For Tolkien, The Silmarillion, The Hobbit, and The Lord of the Rings represent manifestations or fragments from the mythological world of Middle-earth. These stories by no means exhaust the history of Middle-earth. When Tolkien’s popularity within mainstream culture hit a high mark in the mid-1960s, interviewers and reporters incredulously commented that the elderly author believed the most troublesome problem with the 1,000-plus page Lord of the Rings was that it was too short! As Christopher Tolkien has demonstrated with the twelve-volume History of Middle-earth, his father’s creativity was immense, if not overwhelming.

Tolkien believed his legendarium to be a single entity revealed to him over time. To him, The Silmarillion and The Lord of the Rings were a continuation of the same story, inseparable, and, when divided, incomprehensible. In fact, as Clyde Kilby has noted, there are over 600 references to The Silmarillion in The Lord of the Rings. “Beren now, he never thought he was going to get that Silmaril from the iron Crown in Thangorodrim, and yet he did, and that was a worse place and a blacker danger than ours,” Sam says in The Lord of the Rings, as Frodo and Sam reluctantly follow Gollum to the stairs of Cirith Ungol, entering Mordor. Sam, looking at the light of the Phial from Galadriel, realizes that the quest to destroy the Ring is a continuation of the story of The Silmarillion. “You’ve got some of the light of it in that star-glass that the Lady gave you! Why, to think of it, we’re in the same tale still! It’s still going.” When a rider from Rohan encounters Aragorn, the future king, for the first time, a similar conversation ensues. After a mention of a Halfling, the rider exclaims: “Halflings! But they are only a little people in old songs and children’s tales out of the North. Do we walk in legends or on the green earth in the daylight?” Unmoved, Aragorn responds: “A man may do both. For not we but those who come after will make the legends of our time. The green earth, say you? That is a mighty matter of legend, though you tread it under the light of day!” Little difference, Tolkien’s characters state, exists between history and myth, or between the historian and the minstrel. Indeed, the minstrel may understand the complexities of life far more than the historian, trapped in his archives and specialized, cramped world.

While these passages nicely tie together the two major tales (or “manifestations” as Tolkien preferred) of Middle-earth, they also warn the reader that the fight against evil must continue until the end of time. When Sam asks if “the great tales never end?” Frodo replies no, “but the people in them come, and go when their part’s ended. Our part will end later—or sooner.” Tolkien’s world of myth comes before our world of history, and his tale—because it is linked with our tale, the tale of a fallen world—never truly ends, until the Apocalypse.

The second aspect of Tolkien’s mythology that must be understood is his firm conviction that God authored the history of Middle-earth, in all its manifestations. Tolkien thought that he merely served as a scrivener of God’s myth. “I have long ceased to invent,” Tolkien wrote in 1956. “I wait till I seem to know what really happened. Or till it writes itself.” A British Member of Parliament once told Tolkien, “You did not write The Lord of the Rings,” implying that the story had a divine source. Tolkien agreed. “The Other Power then took over: the Writer of the Story (by which I do not mean myself), ‘that one ever-present Person who is never absent and never named.’ ” Usually, this presented no great burden to Tolkien. His task to record was, he knew, a supreme gift. After all, both Tolkien and C. S. Lewis argued, God spoke through the minds of poets. “[T]he story of Christ is simply a true myth,” Lewis wrote to his friend Arthur Greeves. “One must be content to accept it in the same way, remember that it is God’s myth where the others are men’s myths, i.e. the Pagan stories are God expressing Himself through the minds of poets, using such images as He found there.” G. K. Chesterton had argued something similar in 1925: “Mythology . . . sought God through the imagination; or sought truth by means of beauty.” Similarly, Tolkien believed that he served as a poet-recipient of God’s secondary myths, that he was a recorder rather than an inventor. 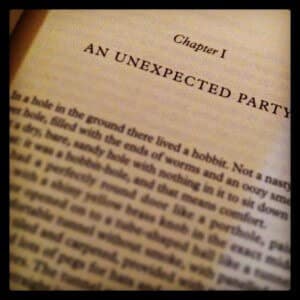 The word hobbit illustrates the way in which Tolkien was often inspired: “I was doing the dull work of correcting exam papers when I came upon a blank page someone had turned in—a boon to all exam markers,” he told an interviewer in 1972. “I turned it over and wrote on the back, ‘In a hole in the ground there lived a hobbit.’ I’d never heard or used the word before.” Bilbo Baggins, Tolkien noted several times, simply wandered into his larger mythology. “I didn’t do much choosing. . . . I wrote The Hobbit you see. . . . [A]ll I was trying to do [with The Lord of the Rings] was carry on from the point where The Hobbit left off. I’d got hobbits on my hands hadn’t I?”

Tolkien frequently found his own stories and mythology puzzling, and he always sought to dig deeper into Middle-earth to find the answers to questions presented him. One of the most troubling manifestations of Tolkien’s “recording” developed at the very beginning of The Lord of the Rings with the unexpected arrival of the Ringwraith. “[S]tories tend to get out of hand, and this has taken an unpremeditated turn,” he confided to his publisher in 1938. The Ringwraith’s appearance, Tolkien noted, disturbed him as much as it did the frightened hobbits in the story. Thus, the new story was rapidly transformed from a delightful and whimsical children’s sequel to The Hobbit into an adult story that wrestled with questions of enormous theological and philosophical import and subtlety.

Besides Ringwraiths and hobbits, other characters presented themselves to Tolkien, and he did not always have time to discuss them in detail. One of the most intriguing omissions from the tales is the story of Berúthiel, briefly mentioned by Aragorn during the harrowing journey of the Fellowship of the Ring through Moria. “There’s one exception that puzzles me—Berúthiel,” Tolkien told an interviewer. “I really don’t know anything of her. . . . She just popped up, and obviously called for attention, but I don’t really know anything certain about her.” He proceeded to take a spontaneous and rather long guess at who she might be, and why she despised cats. The interviewer, a former student of Tolkien’s, writes nothing of what must have been a bewildering and surreal discussion except that she enjoyed being in the presence of such a fine storyteller. Tolkien also regretted leaving Círdan, the keeper of the Grey Havens, as a minor and poorly developed character in The Lord of the Rings. The Silmarillion and the twelfth volume of the History of Middle-earth gives him a satisfactory and interesting context, but the reader never really learns about Círdan as a person. Finally, Tolkien seemed genuinely puzzled over the names, whereabouts, and fate of the two unnamed wizards (members of the Istari) who arrived at roughly the same time as Gandalf, Saruman, and Radagast. Known only as the “Blue Wizards,” they simply fade from the legendarium, never to be seen by any of the characters who populate Middle-earth. Tolkien predicted that either Sauron corrupted them to evil or they had become the founders of Eastern mystery religions and gnostic cults. Considering that Tolkien created such a complex and believable world with what he called an “inner consistency of reality,” complete with its own culture, religion, politics, law, peoples, languages, topography, and climate, it is astounding that there are not more loose ends in Tolkien’s mythology.