This distinctive online course is an introduction to the American government and is considered a college-level course offered through Washington College, taught by ISI-affiliated faculty member Professor Joseph Prud’homme. Professor Prud’homme is the Director of the Institute for Religion, Politics, and Culture at Washington College.

This course examines the foundations of the United States Constitution, American political culture, and the dynamics of American politics. Along the way, special focus will be placed on the meaning of freedom in the United States. Space is limited to 12 promising students to ensure a seminar learning experience with extensive discussion and dialogue of the assigned texts and concepts. Many prominent guest speakers will join Professor Prud’homme in instructing this course, including Tom West of Hillsdale College, among others. 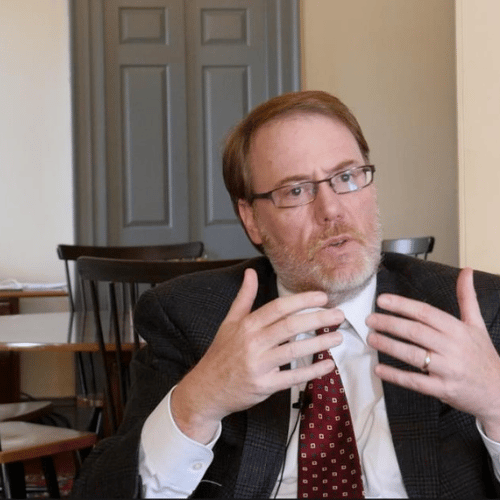 Joseph Prud’homme is the Burton Family Chair in Religion, Politics, and Culture and Associate Professor of Political Science and Affiliated Faculty member in Religious Studies. Professor Prud’homme is the founding Director of the Institute for Religion, Politics, and Culture at Washington College. He received his doctorate from Princeton University, where he studied in the Interdepartmental Program in Political Philosophy, with additional specialization in constitutional law and religious studies. He was awarded a Fellowship at Harvard University, where he studied at the Harvard Law School and served as a member of the Faculty of Arts and Sciences. He has also held a Visiting Fellowship at the University of Oxford.

Professor Prud’homme works in the areas of political philosophy, legal theory, intellectual history and religious studies. He has published numerous works in these fields, including the books Religion and Politics in America from the Colonial Period to the Civil War; Curriculum and the Culture Wars: Debating the Bible’s Place in Public Schools (with Melissa Deckman of Washington College); State Religious Education and the State of Religious Life (with Liam Gearon of the University of Oxford); the chapter on Religion and Education for the Palgrave Handbook on Religion and the State; and numerous peer-reviewed articles.

He regularly teaches introductory courses in political theory; upper level courses in political thought; upper level courses in constitutional law and legal philosophy; and courses in Western religious traditions. Through the Institute for Religion, Politics, and Culture he is the series editor of the international peer-reviewed book series, Washington College Studies in Religion, Politics, and Culture. He also co-directs the Washington College Presidential Fellows track, “The Great Questions.”

He directs a partnership between Washington College’s Institute for Religion, Politics, and the University of Oxford and regularly takes students to Prague and Vienna and on study tours of the monstrous death camps in Auschwitz.

He is a frequent guest lecturer nationally and internationally.